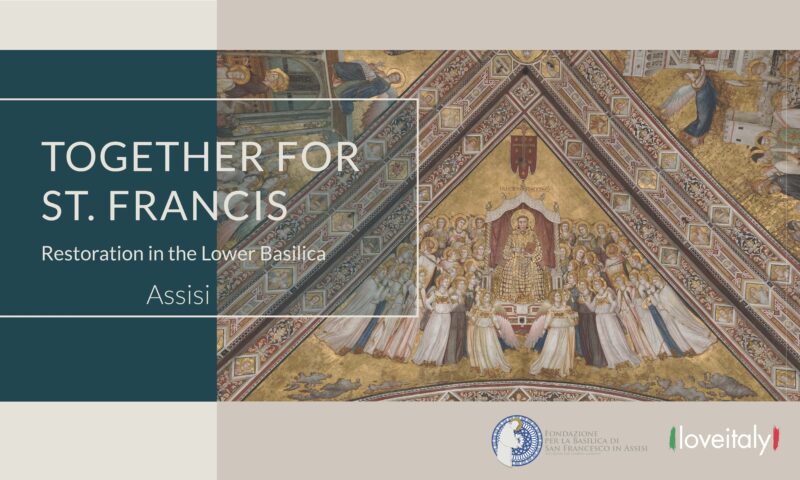 “Together for St. Francis” is the project that intends to create a network to safeguard and promote the Lower Basilica of St. Francis in Assisi, launched by the Foundation for the Basilica of San Francesco, the non-profit foundation that supports the religious and cultural heritage of the architectural complex of Assisi and LoveItaly, non-profit organization dedicated to ensuring a future for Italy’s cultural heritage, established by LVenture Group.

In creating a network, the project wants to encourage the global community to come together in support of one of the world’s architectural masterpieces and its universal cultural and spiritual heritage, a destination par excellence for pilgrimage and worship unconfined to a single religion.  The crowdfunding campaign to finance restoration of the lunette of “St Francis in Glory” on the Vault of the Vows in the Lower Basilica offers a unique opportunity to contribute in its safeguarding by returning the fresco to its original beauty.

Restoration work to repair damage caused by earthquake and seismic events and environmental factors grows increasingly urgent:  there are clear and widespread signs of sedimentation, detachment and blistering of the pictorial layer, and lesions on the whole surface area of the fresco.  Both the paint and ground layers require restabilizing and reattaching to the support layers beneath.  Old grouting– from previous restoration work- will be consolidated or replaced with fillers of appropriate and compatible compounds.  Separated parts of the pictorial layer will be reattached with injections of acrylic emulsion and then, the surface area will be lightly brushed with dry sponges to detach any settled dust, saline crystals or cobwebs.

“As friars of the Sacred Convent we have the enormous privilege of safeguarding the Basilica where the mortal remains of St. Francis of Assisi lie in rest.  Many artists were called here to honour St. Francis with their skilled work.  This is how this Basilica and Convent, decorated and enhanced by the work of architects, builders, sculptors, painters, became the unique treasure it is today.  Now, it is up to us to preserve these masterpieces by Cimabue, Giotto, Pietro Lorenzetti, Simone Martini.  We safeguard them in your name and in the name of the millions of visitors who come every year, so that the future generations may also enjoy all this beauty, the expression of art and faith.  This can be done with the help of everyone”, said Father Marco Moroni, pro-tempore Custodian of the Sacred Convent of St. Francis in Assisi

“We are honoured to be working with the Foundation for the Basilica in Assisi to safeguard the rarest of treasures in our cultural and spiritual heritage, aiming to restore its original beauty.  The mission of LoveItaly is to promote the country’s artistic and cultural heritage and the project we inaugurate today is an important opportunity to gather the global community around one of her symbols” said Stefano Pighini, Vice President of LoveItaly.

Foundation for the Basilica of San Francesco in Assisi is a non-profit organization established on 16 February 2002 by the General Custody of the Sacred Convent of St. Francis in Assisi. Its objectives are the protection, promotion and enhancement of the religious, historical and monumental heritage represented by the Basilica and the Sacred Convent of St. Francis of Assisi in Assisi, Italy. These objectives are to be achieved in collaboration with other authorities and entities specifically appointed for the purpose. They also include the development of projects for safety, environment and peace, in the Franciscan Spirit, not only inside but also outside the site in Assisi, both on Italian territory and abroad. The advancement of such projects is due to the knowledge and skills provided through collaboration with both Italian and international parties.  To achieve these goals, the Foundation is fortunate to count on the voluntary and unpaid contribution of all the individuals and organizations who participate in the various projects, providing their knowledge and skills. The Foundation is also grateful for the financial support of its generous donors.