Share your idea, put up your feet, stay awhile.

The frescoes of the Vault of the Vows in the Lower Basilica of St. Francis in Assisi are in critical condition. Restoration work is urgently required to ensure the future of this incredible vault, in particular the central part depicting St. Francis in Glory, an unequalled representation of the artistic, historic and spiritual wealth of this place.

“As friars of the Sacred Convent we have the enormous privilege of safeguarding the Basilica where the mortal remains of St. Francis of Assisi lie in rest. Many artists were called here to honour St. Francis with their skilled work. This is how this Basilica and Convent, decorated and enhanced by the work of architects, builders, sculptors, painters, became the unique treasure it is today. Now, it is up to us to preserve these masterpieces by Cimabue, Giotto, Pietro Lorenzetti, Simone Martini. We safeguard them in your name and in the name of the millions of visitors who come every year, so that the future generations may also enjoy all this beauty, the expression of art and faith. This can be done with the help of everyone”.

Together for St Francis | Assisi 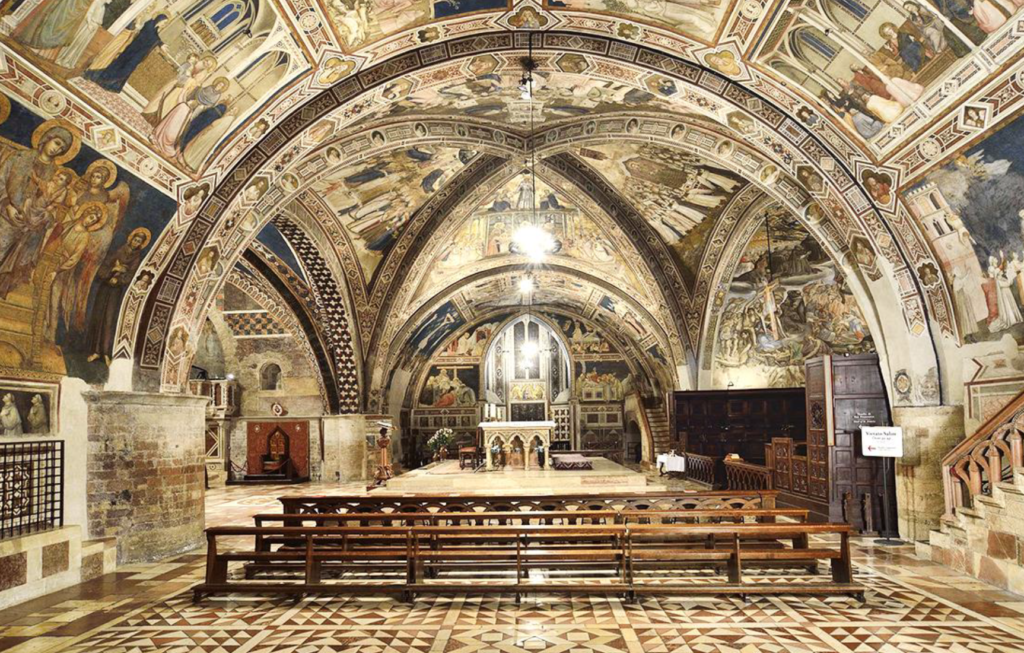 The Lower Basilica was built in Assisi as a crypt to preserve the remains of St. Francis in the city of his birth, today a place synonymous with spirituality and peace. The architectural complex of the Basilica – a destination par excellence of pilgrimage and worship – conserves inestimable masterpieces, frescoes by Giotto and Cimabue that depict the extraordinary life of St. Francis.  These frescoes are both a celebration of the man, whose universal spirituality is recognised not only by Catholics and Italians, but also by orthodox Christians and Protestants, Hindus, Buddhists, Jews and the non-religious, and unique artistic heritage that marks a key moment in figurative art. 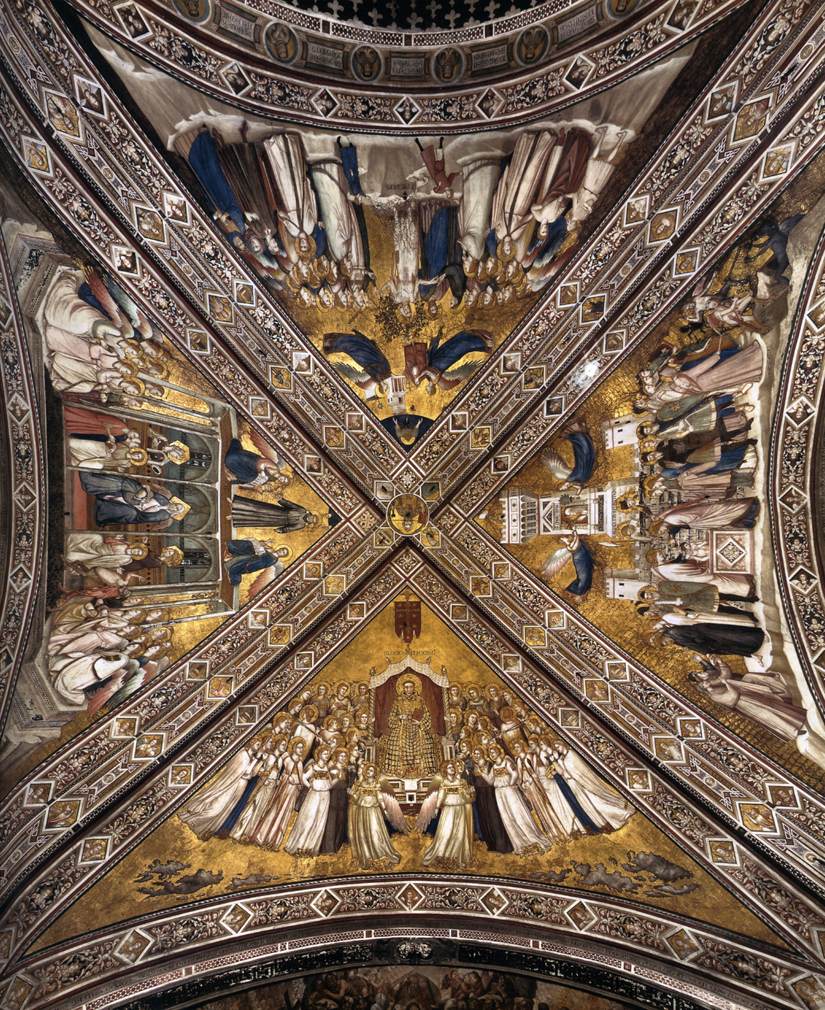 The presbytery of the Lower Basilica, which preserves the Gothic style papal altar consecrated in 1253, has a large cross vault frescoed by Giotto and his workshop (circa 1334).  Three lunettes depict allegories of the key vows of the Franciscan Order: Obedience, Poverty, Chastity while the fourth features “Saint Francis in Glory” on a golden background.  The allegorical figures in the decorative motifs are taken from the Apocalypse and the Old Testament. 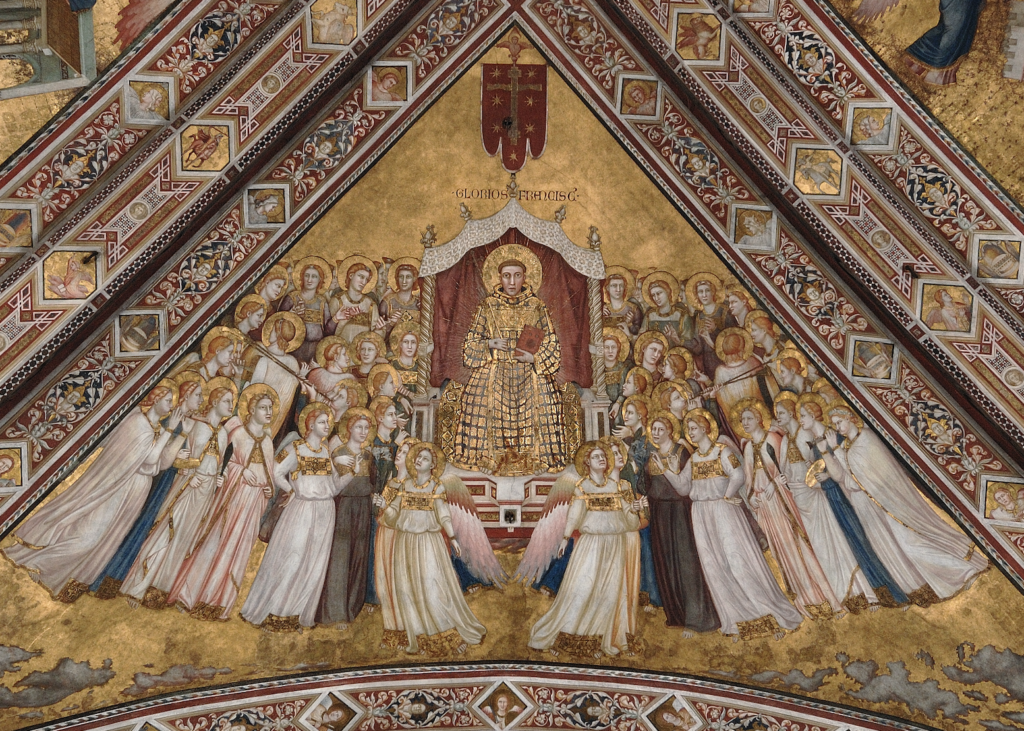 Here St. Francis is shown as Alter Christus – a living representation of Christ – characterized by the precious tunic reminiscent of Byzantine icons.  The precious gold leaf used in the background marks the height of sumptuosity in the Basilica, a revisionist tribute to the saint at odds with the poverty he preached. This extraordinary lunette requires urgent restoration to ensure the future of this wonderful Vault, an unparalleled example of the artistic, historical and spiritual heritage of Assisi. 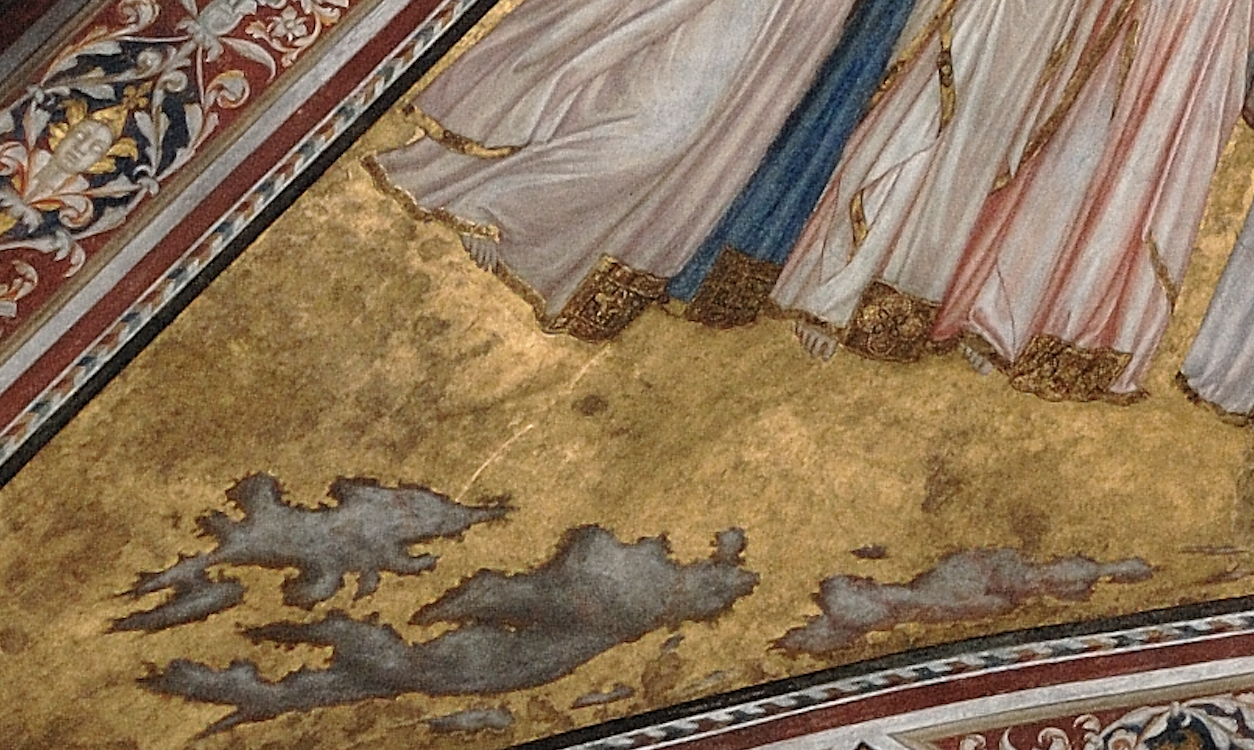 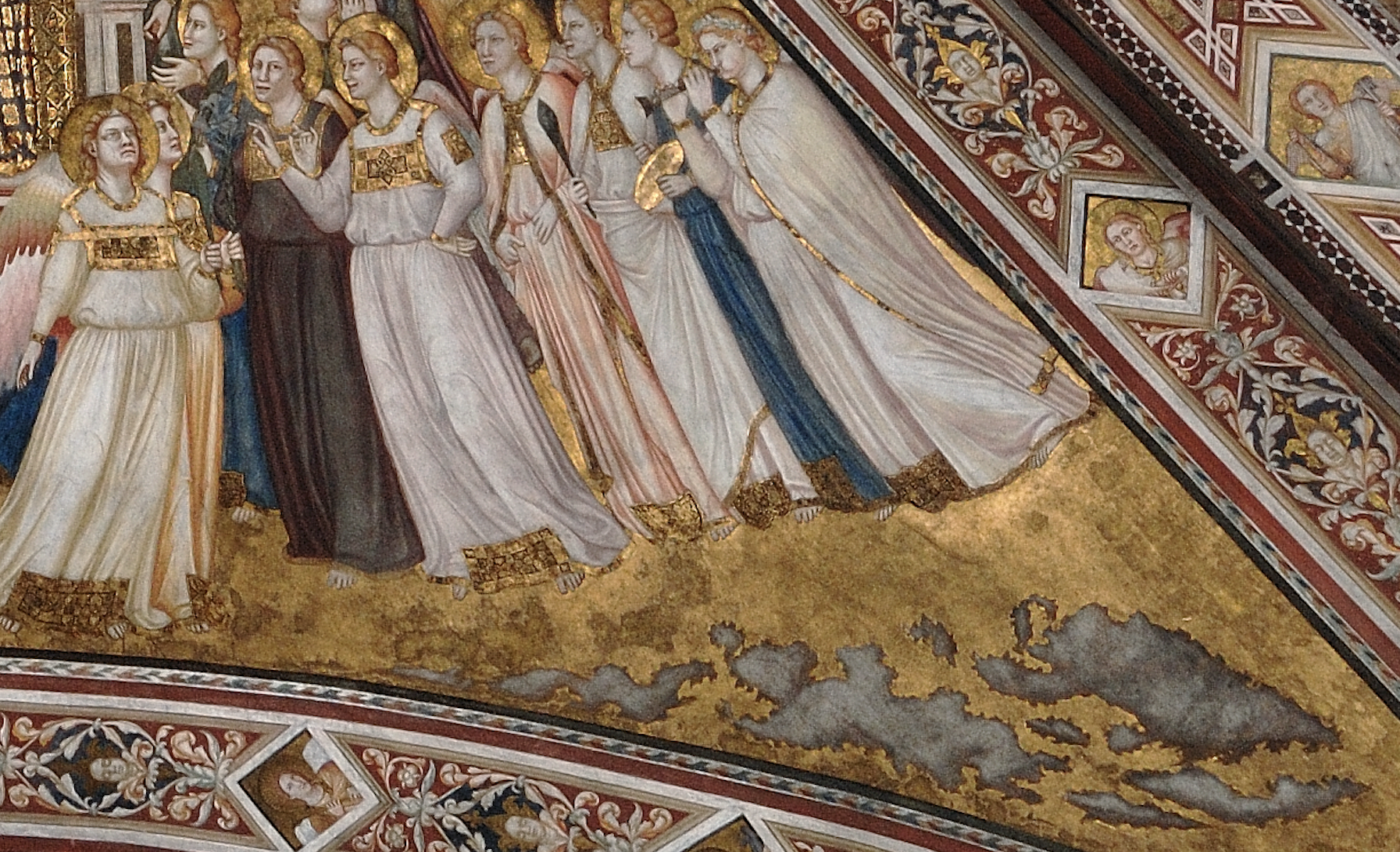 The frescos of the vault in the presbytery are vulnerable to various factors, ranging from seismic damage – given the nature of the site itself – to microclimatic deterioration caused by the constant presence of visitors. Conservation work on the Vault was last carried out 50 years ago.  There are clear and widespread signs of sedimentation, detachment and blistering of the paint layer, and lesions on the whole surface area of the fresco.  In the coming months, preventative conservation work will begin on the entire Vault of Vows above the main altar of the Lower Basilica. 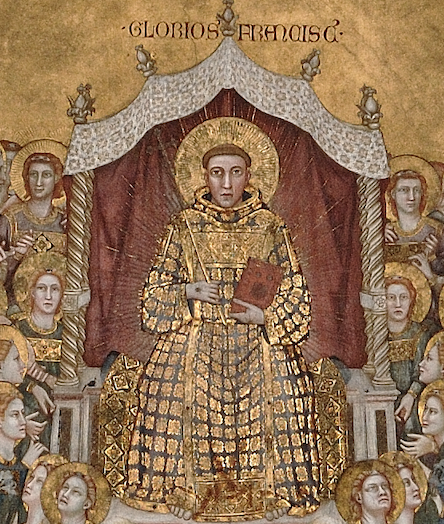 Who was St. Francis of Assisi?

St. Francis is one of the most revered religious figures in history thanks to the universality of his spirituality, the simplicity of his message and his love for creation.

He is the patron saint of animals and birds, his “brothers” and “sisters” as he called them in the “Canticle of Brother Sun”, the first poetic text written in Italian, where he praises natural creatures as a mirror of God. St. Francis is patron saint of Italy and the city of Assisi as well as five North American cities: Denver (Colorado); Metuchen (New Jersey); Salina (Kansas); San Francisco (California); and Santa Fe (New Mexico).

St. Francis of Assisi, the man

St. Francis was born in Italy around 1181 into a wealthy family of textile merchants. After fighting in a battle between Assisi and Perugia, he was captured and imprisoned. He spent almost a year in the notorious Perugia prisons until he was returned to his father in exchange for a ransom. After his release, Francis had a spiritual epiphany that prompted him to renounce all his possessions. Consequently, he abandoned his life of luxury, began an intense life following the Christian faith and in 1209 welcomed other young people from Assisi, fascinated by his example, who with him formed the first nucleus of the Franciscan Order. He was canonized by Pope Gregory IX in 1228, two years after his death, when work on building the Basilica began. 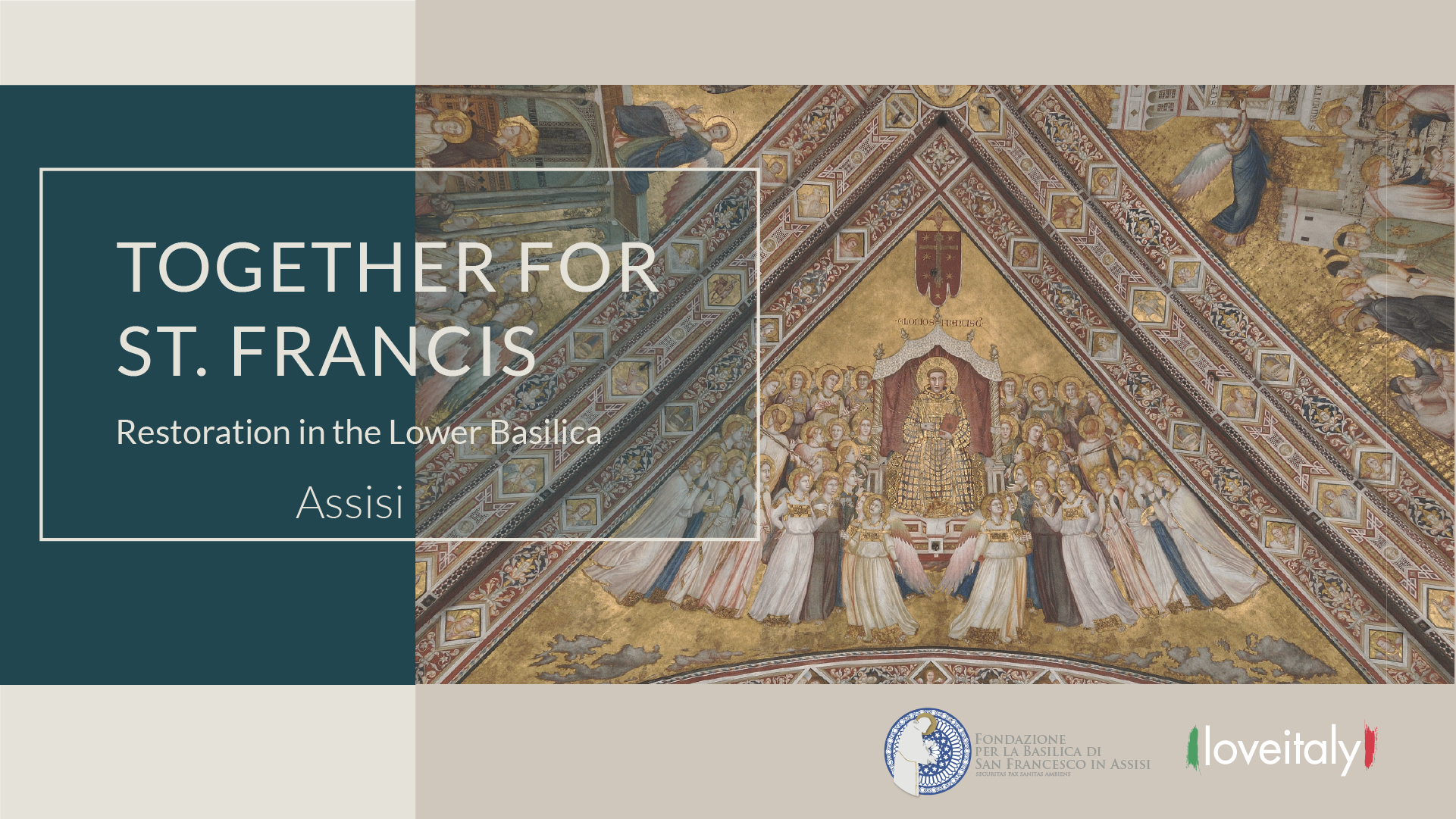 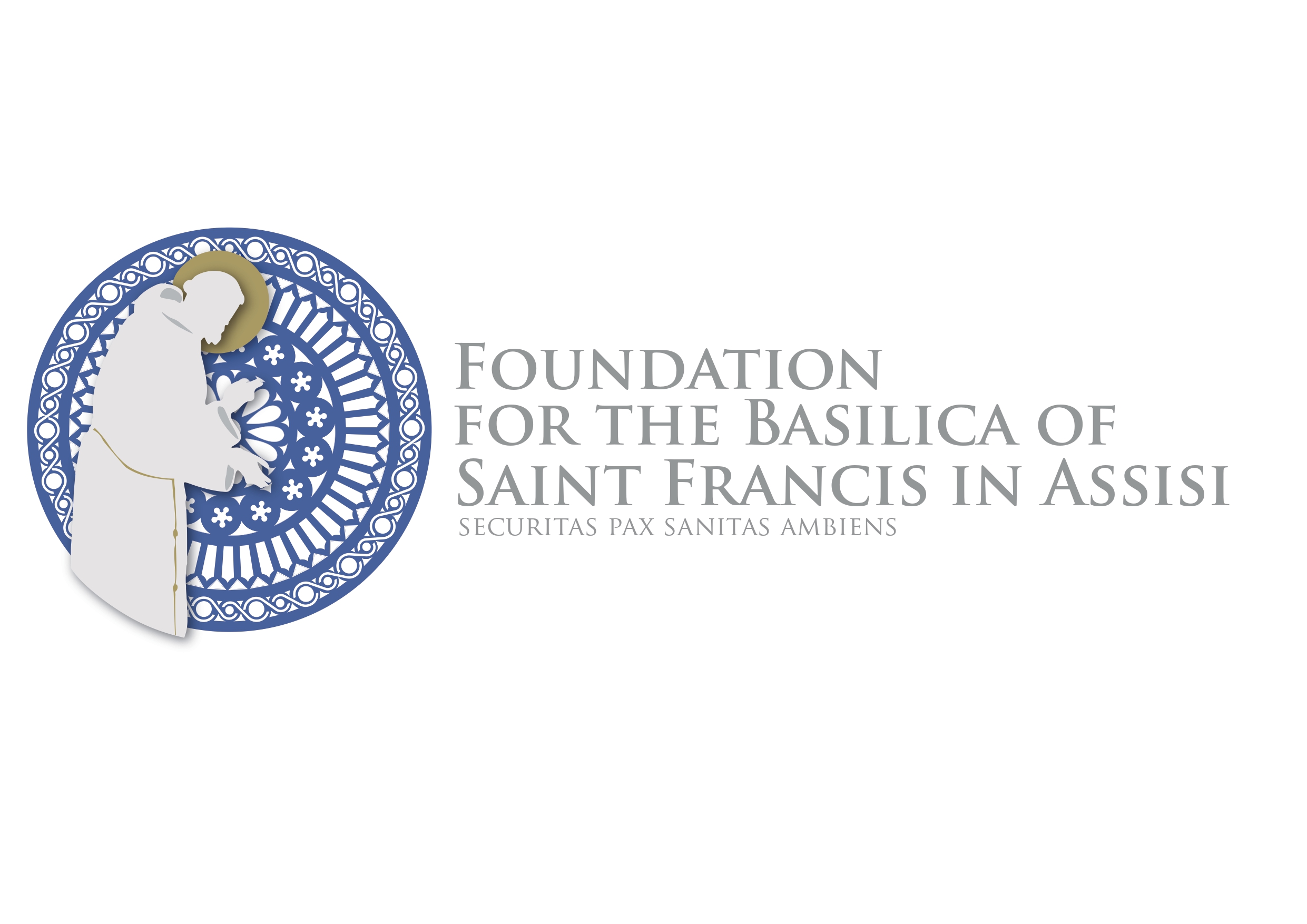 Foundation for the Basilica of San Francesco in Assisi is a non-profit organization established on 16 February 2002 by the General Custody of the Sacred Convent of St. Francis in Assisi. Its objectives are the protection, promotion and enhancement of the religious, historical and monumental heritage represented by the Basilica and the Sacred Convent of St. Francis of Assisi in Assisi, Italy. These objectives are to be achieved in collaboration with other authorities and entities specifically appointed for the purpose. They also include the development of projects for safety, environment and peace, in the Franciscan Spirit, not only inside but also outside the site in Assisi, both on Italian territory and abroad. The advancement of such projects is due to the knowledge and skills provided through collaboration with both Italian and international parties. To achieve these goals, the Foundation is fortunate to count on the voluntary and unpaid contribution of all the individuals and organizations who participate in the various projects, providing their knowledge and skills. The Foundation is also grateful for the financial support of its generous donors.

Donation of € 10. Digital certificate; Thanks on the “Angels” page of the LoveItaly website. rnThe Franciscan friars of the Basilica of Saint Francis will pray for the material and spiritual needs of all donors and will offer their particular prayer intentions during the celebration of Mass 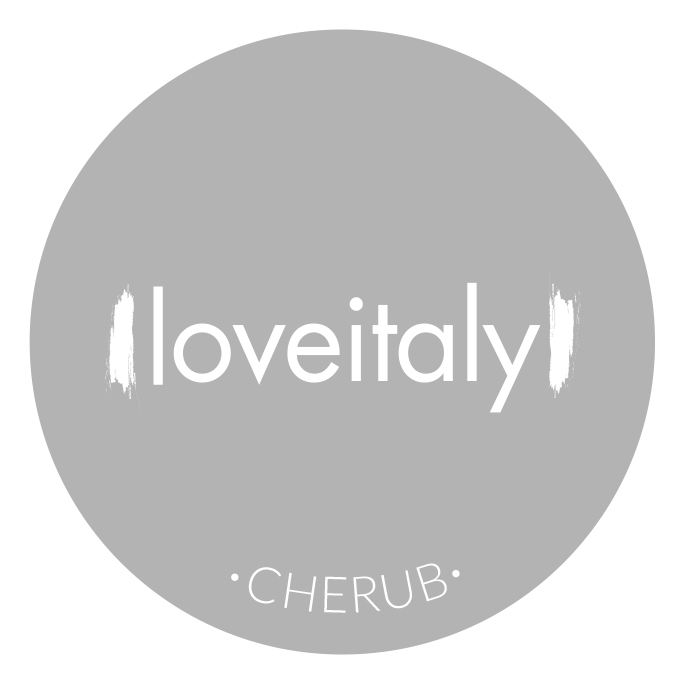 All Cherub rewards plus: Name recognition on the website of the Basilica of Saint Francis of Assisi. 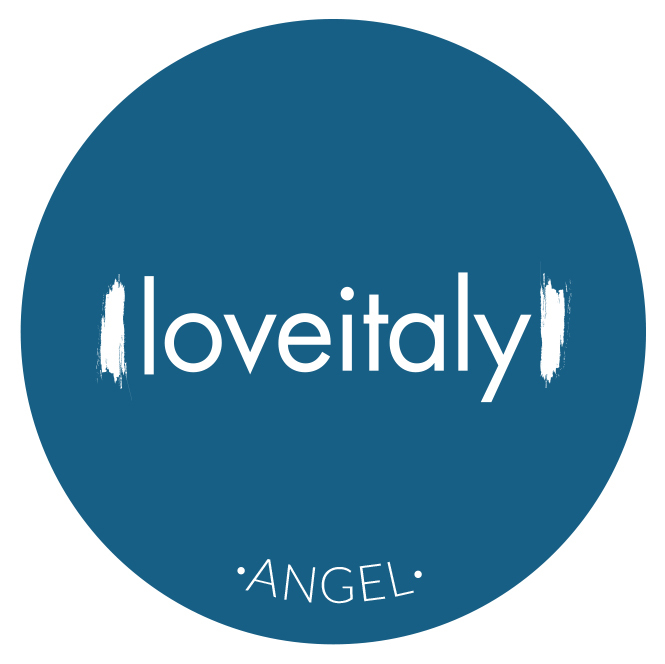 All Angel rewards plus: Name recognition in the e-book about the restoration project in the Basilica of Saint Francis of Assisi. 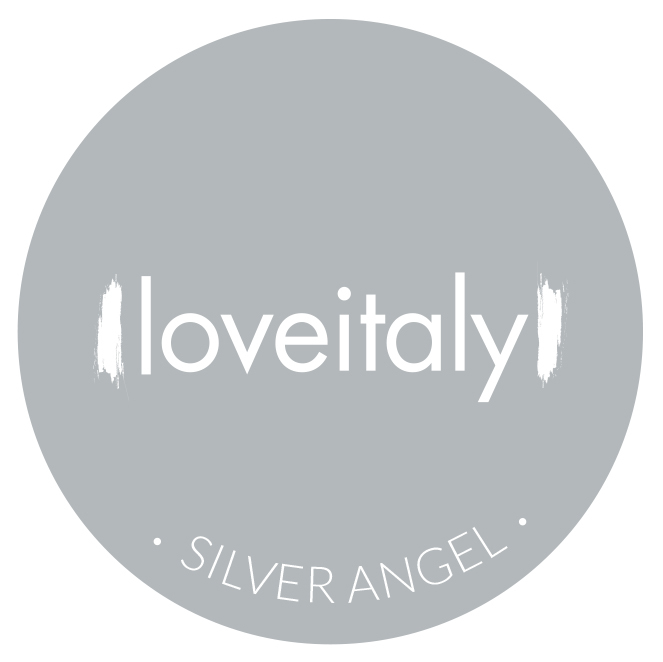 All Silver Angel rewards plus: Name recognition on the final video on YouTube + Invitation to participate in exclusive LoveItaly activities and events. 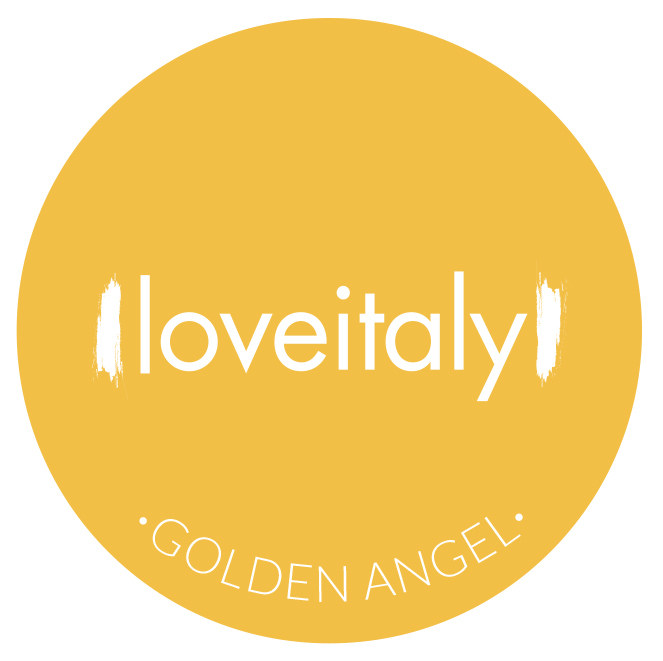 All Golden Angel rewards plus: Name recognition on the web page of the exhibition about the restoration on the Omeka restoration. Exclusive visit to the Basilica and Sacred Convent, guided by a friar. 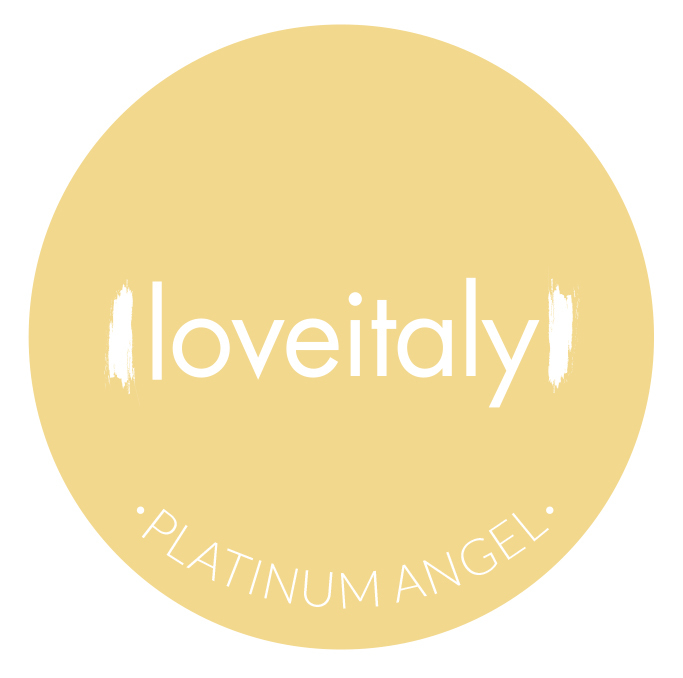 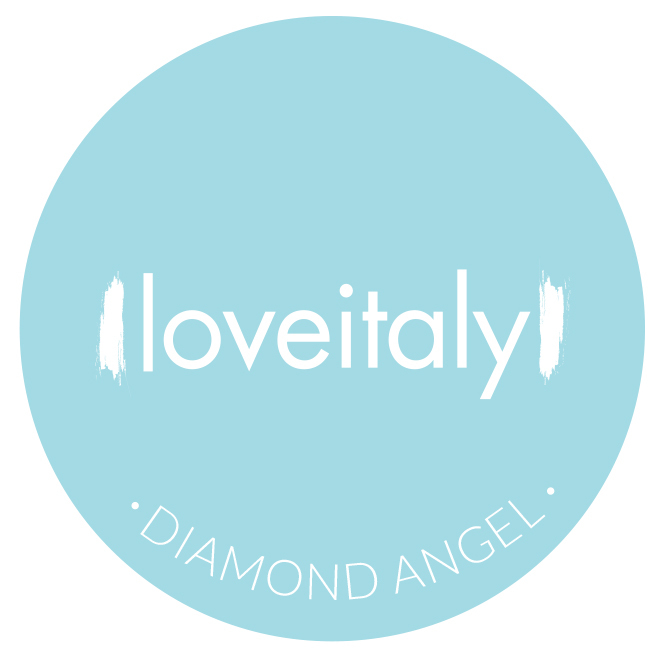 All Diamond Angel rewards plus: Exclusive tour of the Library of the Sacred Convent and the Treasure Museum guided by a friar. 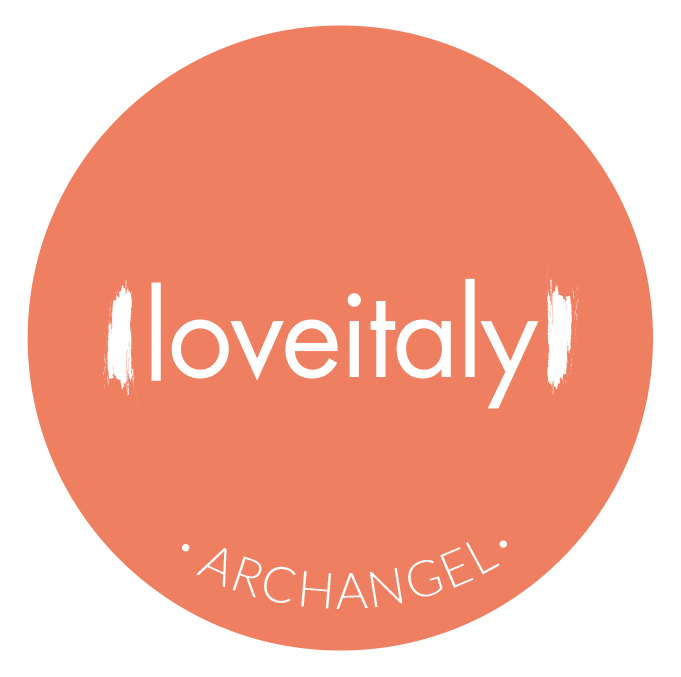 We accept offline donations as well, here is the information for bank transfers. If you choose to send us a bank transfer, please email us a copy of the receipt so we can list you as a Donor on our website!