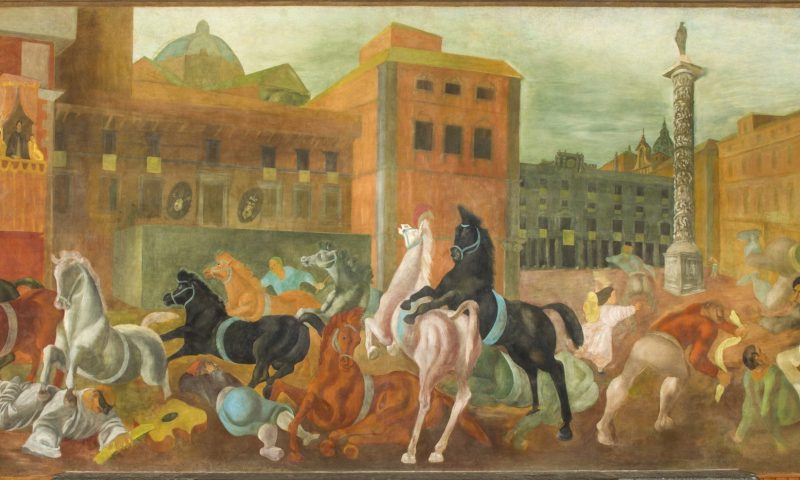 “THE RACE OF THE BERBER HORSES”

at the National Academy of Dance in Rome.

Thanks to the generous donation from the Ruth Stanton Foundation in New York, conservation work has restored Corrado Cagli’s Race of the Berber Horses, a mural painting in the main dance room of the Italian National Academy of Dance in Rome.

The race of the riderless Berber horses (a North African breed also used in the Palio di Siena and sometimes referred to as Barber) in the Corso was a feature of the Roman Carnival. This was already based on a long tradition of tournaments and races when in 1462, after the election of Pope Paul II, Via del Corso (then known as Via Lata) was built purposely for races. The main event in the carnival was the race of the Berber horses. The horses were gathered around the obelisk in Piazza del Popolo where stands were erected so that the richest and most powerful people in the city could watch  the race start close hand. People would rent space along the Via Lata to watch the race and the balconies overlooking the street were adorned with ribbons and brocade and crowded with spectators throwing flowers and confetti.

The horses galloped down Via Lata to Piazza Venezia, where a large drape hanging across the road marked the finish line. The arrival and “capture” of the horses are remembered as extremely spectacular moments. Nobles, members of royal families, artists and travelers flocked to Rome for the race as the many written accounts and drawings that have been passed down attest. However, following the death of a young onlooker, King Vittorio Emanuele II abolished the event in 1874, which marked the beginning of the decline of the carnival of Rome.

The artist Corrado Cagli was commissioned in 1935 to decorate the walls of the Library for the newly planned building of the Balilla National Opera by the architect Gaetano Minnucci. The mural he created depicts the Race of the Berber Horses, commemorating the famous event of the past. Although commissioned during the Fascist period, the theme was not considered appropriate for the ideological rhetoric of the regime and the order was given to destroy the work.  However, Cagli succeeded in building a false wall in front of it, which was never discovered.   The wall was dismantled in 1945, bringing back to life a landmark testimony of the Italian culture of the Thirties.