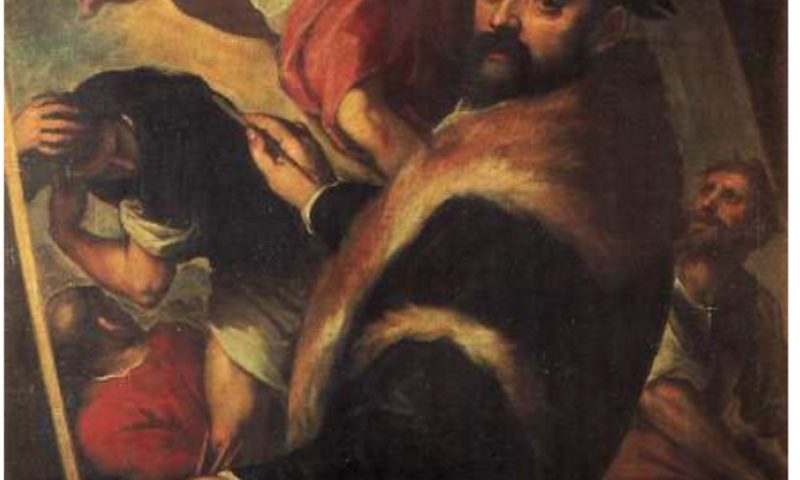 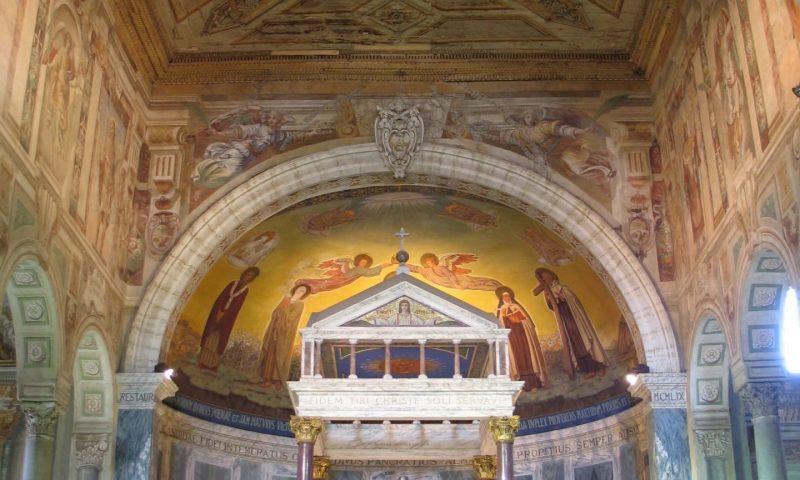 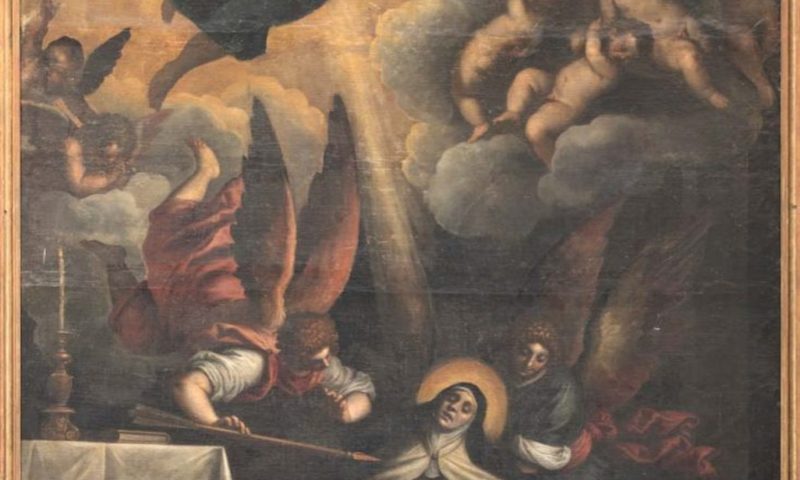 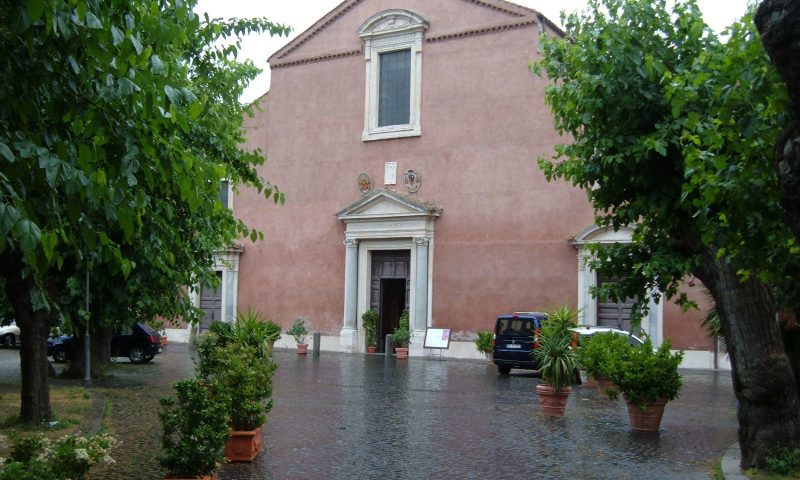 The Ecstasy of St. Teresa of Àvila in the Church of San Pancrazio in Rome, painted in 1615 by Jacopo Negretti, also known as Palma the Younger.

In this beautifully executed piece, Palma the Younger captures the moment in which St. Teresa of Àvila is pierced by an angel’s spear. Derived from an experience described by the saint in her autobiography, this moment of religious ecstasy prefigures her imminent beatification. The earthy colors, delicate lines and intimate imagery of this painting lend it heavenly aesthetics, fitting for such an important moment. This was the first painting to be commissioned of St. Teresa following her beatification and would become the inspiration for Bernini’s sculpture (in the Church of Our Lady of Victory, Rome).

However, Palma the Younger’s painting is today in a critical state of conservation.   The large size and weight of the canvas, combined with the ravages of time, are mainly responsible for the diminished state of this masterful work of art.

The painting (oil on canvas, dimensions: 4.20 x 3 m) hangs in the Basilica di San Pancrazio (St. Pancras) on the Gianiculum Hill in Rome, home to members of the Discalced Carmelite Order, for whom St Teresa of Àvila is a patron.   A symbol for the parishioners,  half the amount needed has already been raised by the local community. Let’s help them collect the rest.

Jacopo Negretti was born in Venice into a family of painters between 1548-1550.  He began painting at age fifteen, his artistic formation first influenced by his great-uncle Palma the Elder.  His talents were recognised by Guidobaldo II della Rovere, duke of Urbino, illustrious patron of the arts, who supported him and sent him to Rome.  While influenced by Raphael during this time, he remained stylistically faithful to the Venetian School. Palma the Younger is reported to have been a favourite pupil of Titian who, following the master’s death, completed his celebrated work, La Pietà.

We hope that restoration of this painting will also provide new information about the technique of this prolific Italian artist.

THE COMMISSION AND THE PRESENT SETTING

St. Teresa’s reform of the Carmelite Order met with much opposition which lead to the founding of a separate province of the Order – the Discalced (Barefoot) Carmelites – in 1593.

The painting was commissioned for the Church of St. Mary of the Stair (S. Maria della Scala) in Rome in 1618 to commemorate her beatification in 1614, prior to her canonization (1622).  This parish was (and still is) entrusted to the Discalced Carmelites and conserves her right foot in reliquary.

In 1662, the painting was moved from its original setting to the Basilica di San Pancrazio as a gesture to mark the establishment of a Discalced Carmelite order there.

This ancient basilica was built on the gravesite of the boy martyr, St Pancras, in approximately 500 AD and the catacombs dating to this time are still accessible beneath the present day church.  The legend recounts that a Roman matron – Ottavilla – found his body abandoned on the Via Aurelia and brought it to this area for entombment.

Problems  The most immediate problems are structural inadequacy (the canvas sags and hangs loose from the frame, the surface is buckled) and pictorial damage (a yellowish veneer covers the entire canvas, making the surface stiff and dry).

Observations  The restoration work takes into account the difficulties inherent in a painting of this size.  A latest-generation adhesive, with vacuum-seal technique, will be used to avoid overheating the artwork.   It will also avoid adding weight as the backing used in this kind of application is much lighter than the traditional glue-pasted technique.  The frame will be reinforced or replaced with self-expanding stainless steel.

Time and Procedure   Time frame: Approx. 16 weeks.  The work will be followed by a lead restorer and assistant restorer.  Restoration will take place inside the church, in an area designated by the parish administration, visible to the public behind a barrier.

THIS PROJECT IS CROWDFUNDING TO RAISE €14,295

All donations contributed to this crowdfunding campaign will be allocated to the restoration, regardless of whether the total is reached. 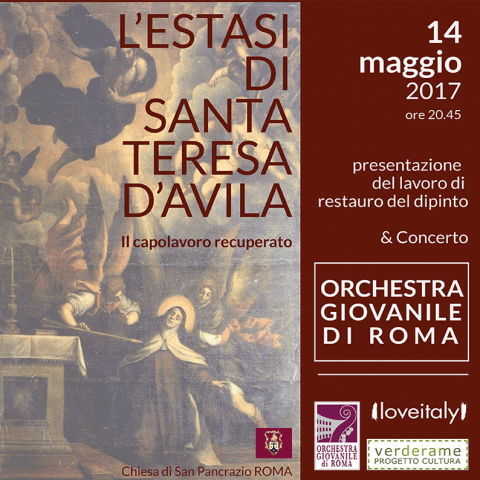 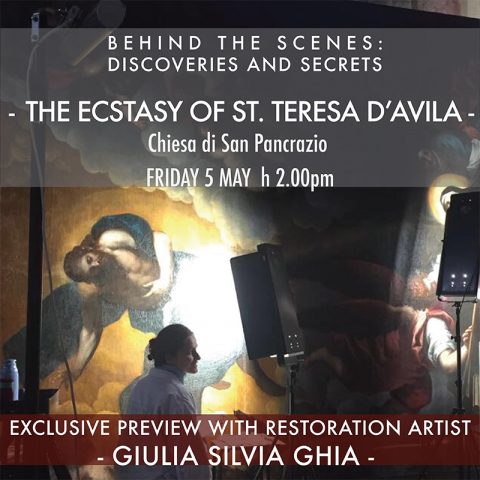 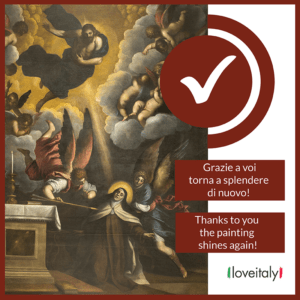