The Villa Farnesina is one of the most famous buildings in Rome and one of the most elegant statements of the entire Italian Renaissance, a masterpiece in which architectural design fuses with pictorial decoration. Although the first Renaissance villas with their formal gardens were built around Florence, the fashion for grand country villas then came to Rome. Many hands were involved in the building and decoration of Villa Farnesina, one of the first ‘country villas’ in Rome modeled on the great Imperial villas of Ancient Rome. One of those hands was Raphael whom the art world will celebrate in 2020 for the five hundredth anniversary of his passing.

Built at the beginning of the sixteenth century by the Tuscan banker and Papal Treasurer Agostino Chigi, it should have been named for him, the highly ambitious patron and art-lover born in Siena in 1466. He commissioned the Villa as the tangible sign of his own personality and high culture, decorating it magnificently and living in it until his death in 1520.  However, after a somewhat troubled history and many changes of ownership, the Villa now bears the name and preserves the memory of the Farnese family, who acquired it in 1579.

And while this building has the indelible imprint of its first creator, it also bears the marks of many more centuries of occupants.  The careful work of restoration has now moved into the rooms that were created several hundred years after Agostino Chigi’s death.

Following the end of the Kingdom of Naples in 1860, Francesco II Bourbon, a Farnese through his mother, was forced into exile in Rome. Here, he eventually moved into his property of “Palazzo Farnese” although he was not destined to stay there. In 1861, he rented the villa for 99 years to the Duke di Ripalta, Salvador Bermudez de Castro, who had previously distinguished himself as the Spanish Ambassador to Naples.

The Duke was in love with Matilde Ludovica of Baviera, who was married to Luigi Maria Bourbon.  She bore the Duke a daughter, Maria Salvadora, who lived in the villa until 1927.

The duke was required to carry out maintenance work during his leasehold and he began restructuring. One of his most significant interventions was the division of Agostino Chigi’s retiring room into two rooms, one of which became the entrance. Today when entering the villa, these rooms are immediately to the left.

These rooms are presently the target of a new restoration intervention. Preliminary work has shown that the 19th century layers still lie beneath the silk hangings. However, there is also the possibility that previously unseen decorations from the 16th century may also come to light.

It may seem that everything about this villa has already been documented, from the Roman villa on the bank of the Tiber beneath to the decoration of the magnificent rooms such as the ‘Loggia of the Galatea’, partly frescoed by Raphael and other painters including Sebastiano del Piombo and Baldassare Peruzzi, but there is still something left to discover.

It is possible for individuals and companies to contribute to the restoration projects ongoing at Villa Farnesina by donating through LoveItaly here:

The Villa Farnesina is today a museum owned and managed by the distinguished Lincean Academy of Rome which has the huge task of continuing the restoration and maintenance of the villa and its gardens. 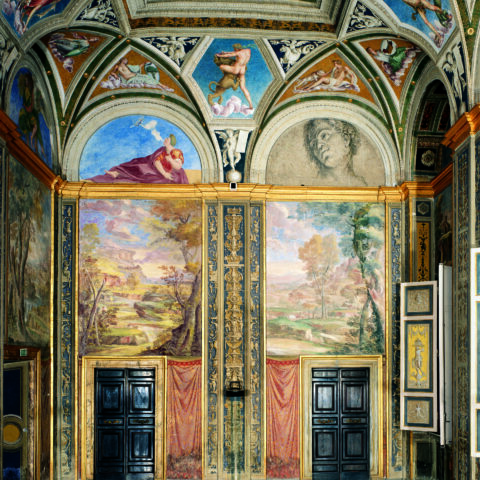