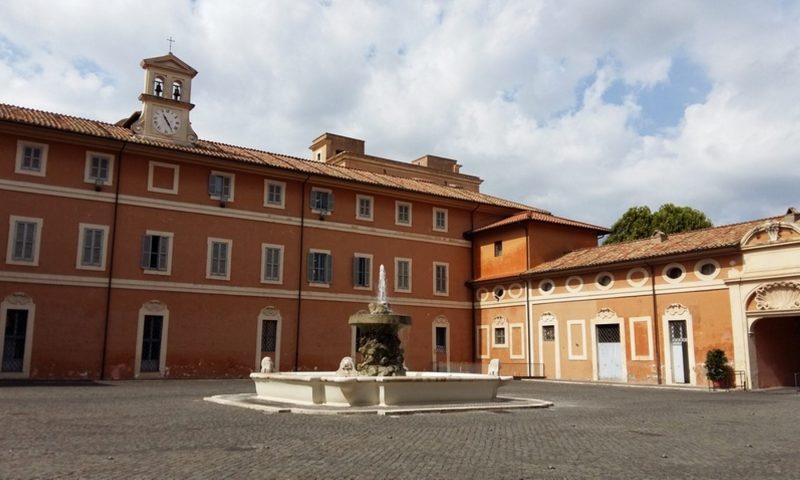 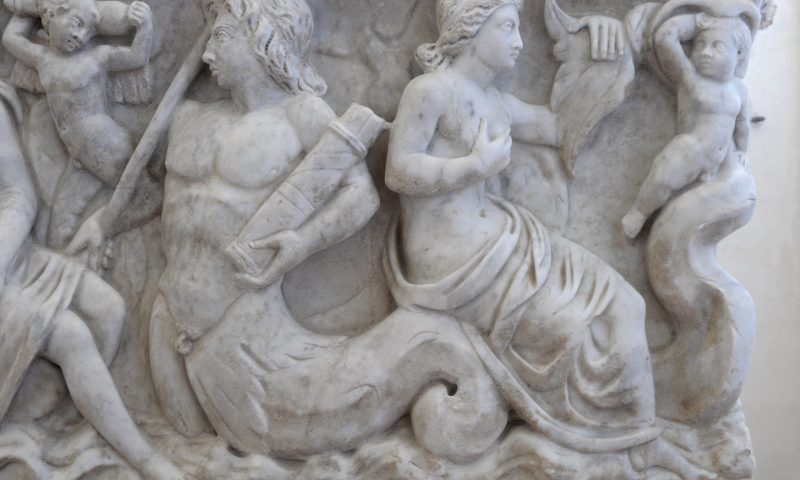 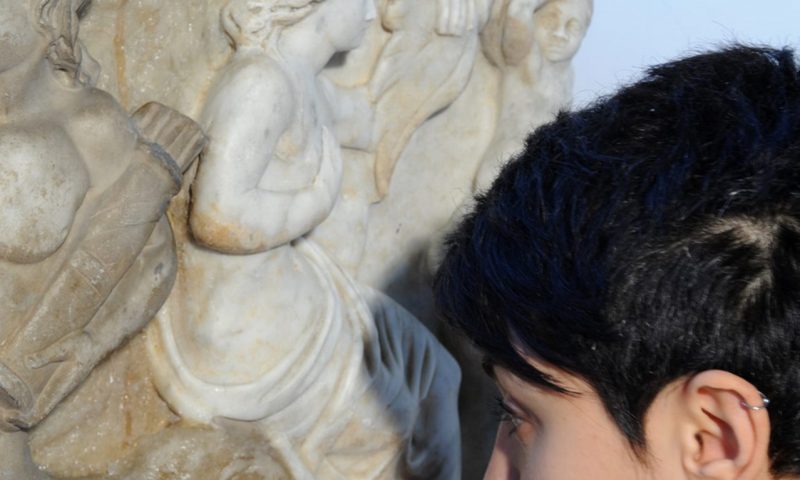 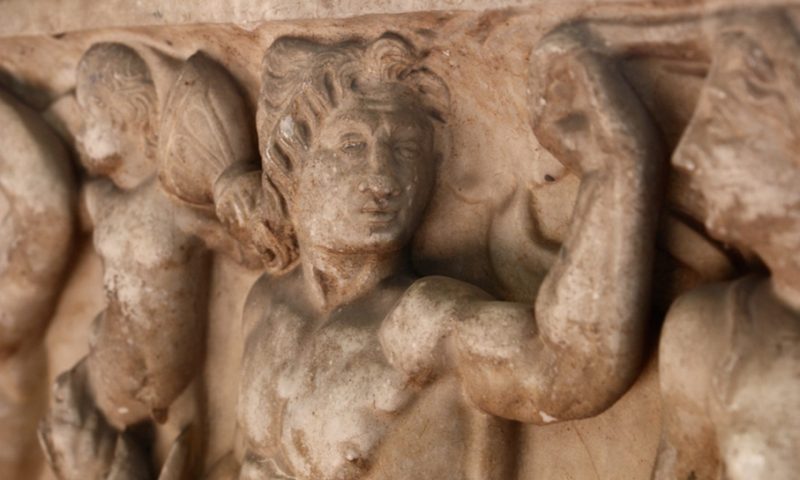 The Sarcophagus restored by the prestigious ISCR

The sarcophagus is one of the most important archaeological treasures in the National Gallery of Ancient Art in the Corsini Palace in Rome. This important artifact, dating back to the Roman Imperial period is currently displayed on the main staircase at the entrance of the Palace and is part of a set of four.  The other three were also previously restored by students at the prestigious National Institute for Conservation and Restoration (ISCR) of Rome. The restoration of the fourth Imperial sarcophagus depicting a “Marine Thiasus” is, therefore, an important project and will complete this part of the Gallery’s collections.

The front of the sarcophagus has a decoration that goes from a high relief to bas-relief with complex portrayal, that takes place on three sides, of a marine procession (a ‘thiasus‘).  The decoration gives the illusion of continuous movement proceeding on the waves of the sea where young Tritons play the characteristic marine Horns.  Kochlos and le Nereidi, their cloaks swelling in the breeze, are seated on dolphins. Even the lid is decorated, with two sloping roofs finished frontoncini and acroteri on the corners.

State of Conservation of the Sarcophagus

Restoration was necessary due to the state of conservation.  The Sarcophagus was affected by extensive shadowing that darkened the original color shades of the marble and was caused by past maintenance work. Deep fractures across the lid are presumably due to previous movements.
The artefact has technical features that are useful for teaching conservation methods for first year students of the School for Higher Education and Study at the National Institute for Conservation and Restoration in Rome.

In Greek mythology and religion, a thiasus (Greek thiasos), was the ecstatic retinue of Dionysus, often pictured as inebriated revellers. Many of the myths of Dionysus are connected with his arrival in the form of a procession. The grandest such version was his triumphant return from “India”, which influenced symbolic conceptions of the Roman triumph and was narrated in rapturous detail in Nonnus’ Dionysiaca. In this procession, Dionysus rides a chariot, often drawn by big cats such as tigers, leopards or lions. The thiasus of the sea god Poseidon is depicted as a triumphal wedding procession with Amphitrite, attended by sea nymphs.

In historical Greek society, thiasoi (plural) were religious organizations whose existence was protected by law. The most significant members of the thiasus were the female devotees, human maenads who gradually replaced immortal nymphs. In Greek vase-paintings or bas-reliefs, lone female figures can be recognized as belonging to the thiasus by their brandishing of the thyrsos, the distinctive staff or rod of the devotee.
Other regulars in the retinue were various nature spirits, including the sileni (or human dancers costumed as such), phalluses much in evidence, satyrs, and Pan. The ithyphallic sileni are often shown dancing on vase paintings.  The tutor of Dionysus is represented by an aged Silenus. The retinue is sometimes shown being brought before a seated recipient: the tragic human welcomer of the gift of wine, Ikarios or Semachos, and his daughter, Erigone. In the triumphal form of procession, Ariadne sometimes rides with Dionysus as his consort. Heracles followed the thiasus for a short while following his loss of a drinking contest to Dionysus.
Other notable depictions in art include the silver “Great Dish” from theMildenhall Treasure, the Lycurgus Cup, and in the Renaissance Titian’s Bacchus and Ariadne. The Dionysian retinue was a popular subject for Roman art, especially bas-reliefs and sarcophagus panels.

Thiasos of the Sea
The marine or sea thiasos depicted Poseidon and his retinue. An original work of Skopas on this theme was taken to Rome and lost, but the scene is well represented in Roman art, from tiny decorative reliefs and large sarcophagus panels to extensive mosaics.

Costs of the Project

National Institute for Conservation and Restoration

The National Institute for Conservation and Restoration (ISCR), was established in 1939, thanks to Giulio Carlo Argan, a famous art critic and politician who was strongly committed to the protection and preservation of  Italian cultural heritage.  Managed for the first two decades by Cesare Brandi, critic and art historian, the Institute held fast to the founding mission and has become a specialized authority for the restoration and conservation of works of art and cultural heritage.  The National School for Conservation, also called SAF, is part of ISCR and is an A+ school, which completes the education and the training of the future restorers. On 7 October 2008, ISCR became a technical body of the Ministry of Cultural Heritage and Tourism, pertaining to the General Secretariat.

The Institute is a place where research, training and systematic and continuous restoration and experimentation take place simultaneously, thanks to a multidisciplinary approach which allows theory to become efficient practice.  Art historians, architects, archaeologists, physicists and experts in environmental controls, chemists, biologists, and restorers of the different types of materials of the artefacts of historical and cultural interest all work together here, making ISCR unique in the world.
The commitment of the institute has grown with time.  Its Geographic Information System lead to the creation of the “Cultural Heritage Risk Map” a powerful tool that documents the vulnerability of cultural heritage, architectural and archaeological, located across the country and deemed at risk from natural (earthquakes, etc.) and/or anthropogenic (theft, fire, tourist abuse) agents.  The “Risk Map” is a crucial tool in defining a policy of conservation work, maintenance and restoration to assist in the preservation of the art in Italy.
The Institute’s renovations include:  Assisi, before and after the earthquake; Leonardo’s “Last Supper” in Milan; the bronze statue of Marcus Aurelius; the underwater findings; the Riace bronzes; the Tarquinia and Pompeii murals and the Tower of Pisa.  These are, however, only a small part of the valuable work that ISCR has done over the years.
ISCR recently opened a branch in Matera (Puglia) elected the European Capital of Culture 2019.  The new headquarters, established in the building of Saint Lucia Nova, is the first in Southern Italy and will allow its students to improve the excellence in restoration of the institute, with their passion and talent for art.

The Corsini Gallery
The Palazzo Corsini is a prominent late-baroque palace in Trastevere, Rome, erected for the Corsini family between 1730–1740 as an elaboration of the previous building on the site, a 15th-century villa belonging to the Riario family.  In 1883, this palace and its contents were sold to the state, and the collection is displayed in its original location. The collection encompasses the breadth of mainly Italian art from early-Renaissance to late-18th century, and features religious and historical works, landscapes and genre paintings.

It houses part of Italy’s national art collection and highlights include Caravaggio’s St John the Baptist, Guido Reni’s Salome with the Head of John the Baptist and Fra Angelico’s Corsini Triptych plus works by Rubens, Poussin and Van Dyck.  From 1659–1689, the Riario palace played host to the eccentric Christina, Queen of Sweden, who abdicated, converted and moved to Rome.  In 1736, the Florentine Cardinal, Neri Maria Corsini, nephew of Pope Clement XII (formerly Cardinal Lorenzo Corsini), acquired the villa and land, and commissioned the structure now standing. During the Napoleonic occupation of Rome, the palace hosted Joseph Bonaparte. 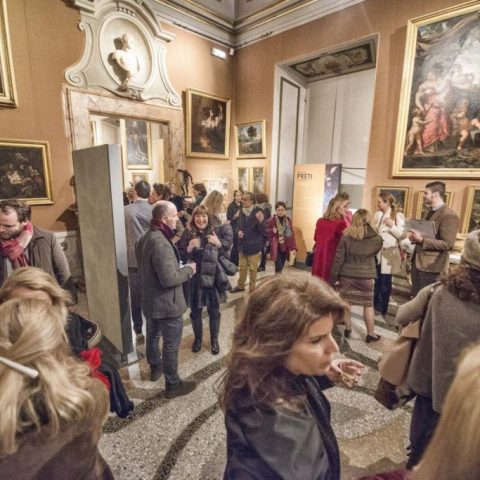 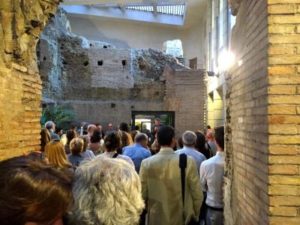 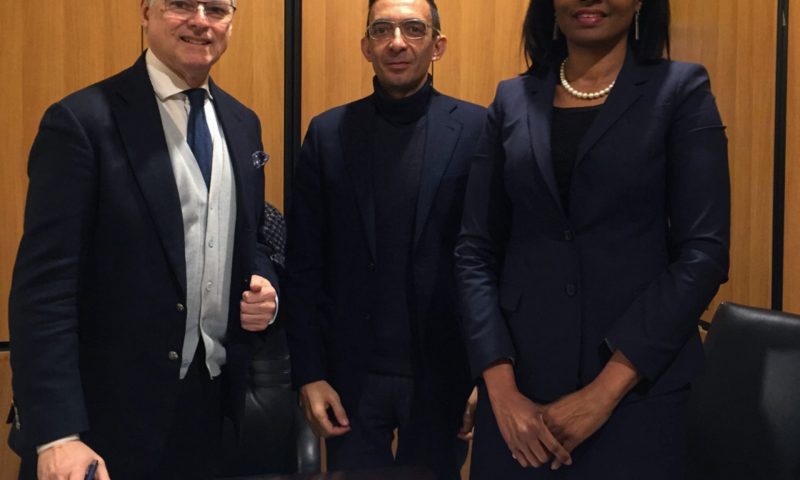 Italy USA Exhibition Program Partnership betweenLoveItaly, American Federation of Arts &Directorate General of Italian Museums. The Italy USA Exhibition Program intends to develop art exhibitions drawn from Italian collections to be presented in museums around the United States. Initial support for the project comes from the Samuel H. Kress Foundation. The cultural cooperation between the
Discover